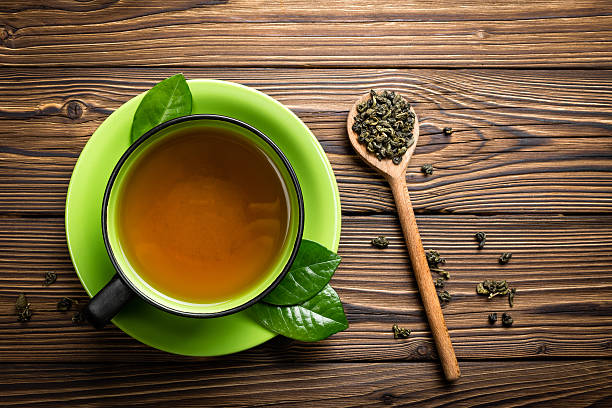 Consumption of green tea has been documented since 2700 BC, and many epidemiological and interventional studies have shown either a strong correlation or a cause-effect relationship with many beneficial health effects of drinking 3-10 cups of tea per day. In addition, many intervention studies have been performed on various extracts of green tea in an attempt to identify the mechanism of action of the individual components, especially the polyphenols.

EGCg (Epi Gallo-Catechin-3-Gallate) is one of the more extensively studied green tea polyphenols, as it was believed and proven to account for many of the benefits observed from dry green tea or green tea extract consumption.

An average cup of green tea is typically made from 5 g dry green tea leaves which provide about 240-320 mg polyphenols (19) and among these, EGCg constitutes about 200 mg (12).

It peaks in the plasma 2 hours after consumption and levels return to baseline after 24 hrs. By isolating a single compound for interventions, studies have been able to elucidate the mechanisms of action behind specific physiological effects, although for supplementation/consumption purposes, it is still advisable to consume the tea or tea extracts that contain a wide array of naturally occurring substances.

In general, the overall effect of naturally occurring mixtures of substances tend to exhibit a greater effect than the sum of the individual components, often due to synergy. For quality and effectiveness, standardized extracts are advisable, as they guarantee a potent amount of the desirable active component with research proven benefits, as is the case with EGCg. Consumption of green tea was shown to increase antioxidant activity in the blood (19).

Administration of a green tea extract containing 375 mg catechins (270 mg EGCg) and 150 mg of caffeine three times per day, to human sedentary subjects, has increased the 24-hr EE (Energy Expenditure) by 4% which can translate into an average of an extra 100-150 calories burned per day. This was thought to be due to the increase in the post meal thermogenesis component of the EE by approximately 40%. Given that the subjects were sedentary, it is conceivable that the difference could have been more substantial with additional exercise induced thermogenesis. More studies on this are needed. The effect was clearly proven to be due to more than that of the caffeine content alone. The mechanism of action of green tea polyphenols is believed to be the inhibition of the COMT enzyme, which degrades NE (norepinephrine), thus prolonging its lipolytic effect. Tyrosine supplementation may be helpful in supporting the optimal production of norepinephrine, especially during stressful states. (1)

In animal models, EGCg was shown to cause a reduction in food intake. (5)

Green tea exerts protective effects on the brain due to its powerful antioxidant activity, for example during ischemic brain reperfusion injury (11). It also seems to be a great candidate for stalling neurodegeneration through additional newly discovered mechanisms (12).

Green tea consumption was shown to protect LDL cholesterol from oxidation, cause a small decrease in LDL levels and reduce platelet aggregation (16). With regards to blood pressure, it should be used with caution: a human study showed no significant ambulatory average increases in BP for regular tea consumers of 5 cups per day (around 2000mg polyphenols), although there was a mild elevation by 5mmHg/1mmHg 60 minutes after consumption.(18)

Reduced Risk of Cancer Development and Metastasis: Through protection against mutagenic substances (such as: smoking, UV light, dietary carcinogens), enhanced detoxification, reduced cell proliferation (by inhibiting IGF-1 pathway and PGE2 formation) and angiogenesis while increasing apoptosis in cancer cells only. In animal models, it was shown to increase the effectiveness of chemotherapy. In animal and human epidemiological studies, the following types of cancers showed reduced incidence and severity in association with green tea consumption: lung, stomach, colon, pancreas, liver, breast, prostate, skin.(13, 14)

EGCg was shown to be effective in conjunction with antibiotic treatment for H. Pylori and against other antibiotic resistant bacteria. (13, 23)

Testosterone is converted by 5-AR (5-alpha reductase) to DHT (Dihydrotestosterone) in various cells in the body, such as epidermal and prostate cells. DHT is thought to contribute to the development of male pattern baldness, acne, hirsutism (excessive facial/body hair in females), as well as prostate enlargement and cancer.

Some popular pharmacological agents used for hair loss inhibit only 5-AR Type 2, expressed in Prostate cells, with no effect on epidermal cells, which express 5-AR type 1. Green tea polyphenols inhibit 5-AR type 1, which makes green tea a good complement to these hair loss formulas and a good candidate for reducing the occurrence and reoccurrence of male pattern baldness, acne and hirsutism. (21)

12. Kostrzewa RM, Segura-Aguilar J. Novel mechanisms and approaches in the study of neurodegeneration and neuroprotection. a review. Neurotox Res. 2003;5(6):375-83.